Have you ever tried out Swiss Meringue Buttercream (SMBC)?

I am glad that I’ve once tried out SMBC. This buttercream is so good that I’ve never looked back since then!

SMBC is frosting made from whipped egg whites, butter and sugar. To ensure food safety, always heat up the egg whites to 65C – 70C, together with the sugar. You’d need to stir constantly, lest the egg whites turn into scrambled egg lol!

And if you’ve ever tasted this buttercream, you’d find that it’s a very silky and fluffy buttercream; much less sweeter than the usual American Buttercream (ABC). What I like about this buttercream is that it holds up fairly well in our humid country. It still gets melty once it’s out from fridge for a while, but at least much better than ABC!

Prepare the butter before you start on anything else. Cut them into tbsp cubes and set aside.

Heat up the egg white and sugar over a pot of simmering water (ie. bain marie).
The water should not touch the bottom of the mixing bowl. 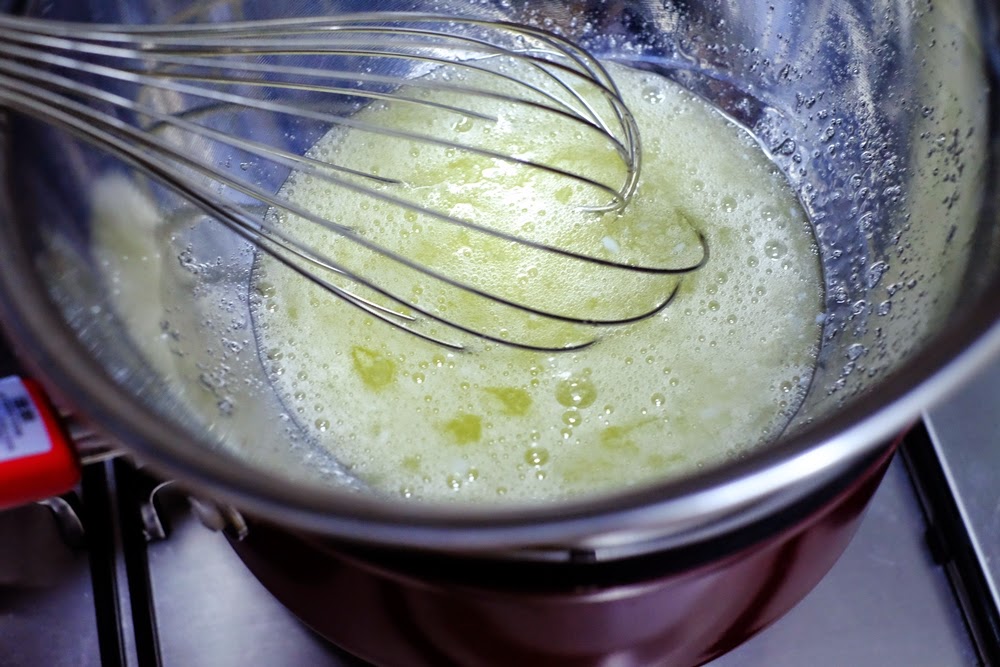 Whisk the egg white and sugar mixture constantly as it gets heated up.

It should get foamy like this. For food safety, egg whites are cooked at 45C. To make this extra safe for consumption, heat up the egg white to around 65C – 70C. If you do not have a candy thermometer, dip your finger in the mixture – it should feel very, very warm to touch and the sugar dissolved.

The mixture will look curdled like this as you gradually add more butter. Just keep beating it. Also make sure the butter is softened, if not your buttercream will not be smooth. The butter should be somewhat “squishy” but not melting.

If you are preparing SMBC for children or pregnant women, you might want to make it extra safe by using pasteurized eggs.

2. Whisk constantly by hand until mixture reach 71C / 160F. The mixture should be very warm to touch, and sugar has dissolved.

3.  Attach the bowl to mixer fitted with whisk attachment. Start on low and gradually increasing to med-high speed. Whisk until glossy, stiff peak form, and until the mixture has cooled. Test by touching the outer sides of your bowl.

4.  With mixer on med-low speed, add butter a few tbsp at a time, mixing well after each addition. Once all butter has been added, whisk in vanilla.

5.  Switch to paddle attachment, beat on low speed until all air bubbles are eliminated (about 2 mins).

6.  Scrape down sides of bowl with a spatula. You might want to continue beating until frosting is completely smooth.

7.  Place bowl into fridge just for a couple of minutes to firm up. Beat again for a few mins and it will be ready to use!