If you have followed me on Twitter and Instagram, you would know that we’re expecting a baby in Dec this year 🙂

I would think that this baby is a “lucky” baby because I have gotten quite a bit of invite after I knew I was pregnant. I managed to attend OMY’s Bugis Food Trail, went to Lek Lim Nonya Cake Confectionery for kueh making, and was invited to some other events which I was not able to make it. And then I became 1 of the finalists for Best Cooking Blog with the Singapore Blog Awards by OMY.SG. 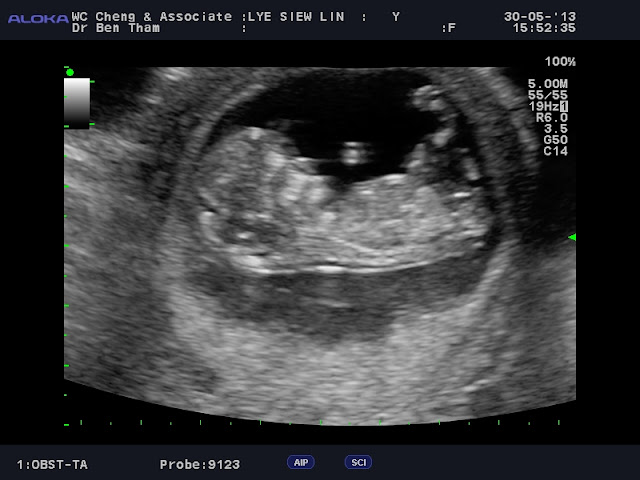 Currently at 11 weeks. I jokingly said the baby has a “like a boss” pose lol.

It hasn’t been easy in the early weeks, and I am thankful that baby is good so far. We see God’s hand over, and His grace upon this pregnancy.

I first tested positive on the pregnancy kit on 7 April. I was feeling pretty stressed up before that, because I had spotting for almost 10 days before I tested positive. I didn’t expect I could be pregnant, so I was more worried about it being cyst or polyp.

I remembered we attended the Resurrection Concert and Feast in church on 6 April, and while watching the video featuring a scene on a baby fetus, I had a weird feeling. That was when I decided to buy a pregnancy test kit.

And the next morning, while preparing to go for church service, I tested myself. I was quite certain it wouldn’t be a positive, until I started to see another line coming up. It felt just like magic to me. I had to read the reading to confirm it was a positive. And then with shaky hands, I tested another one.

So I ran back to my room and whatsapp-ed the hubby to inform him of the pregnancy. But I was still having the spotting then, so the hubby decided that we should go to KKH 24 hours clinic.

After being “traumatised” by the entire issue, the doctor at the 24 hour clinic didn’t make it better. He appeared to be so inexperienced and rough. I was further traumatised -_-

Because it was a very faint line on their PTK, I was scheduled to go in for another blood test 2 days later. And that was when they confirm my very early pregnancy (I think I was only 3 or 4 weeks then).

I thought checking for active bleeding was worse enough, the drawing of blood sample won hands down. The doctor obviously doesn’t have much experience in drawing of blood. He poked me 3x, and then said “I will draw from your pulse”.

You imagine my face, and the nurse then persuaded the doctor to let her staff try.

The interesting thing was, both times I went down for the drawing of blood sample, they could not draw any blood. Once I started to pray, the blood came out 🙂

And then I was due to go back again to KKH for a scan, because the HCG level in my blood test was not enough to detect the sac on ultrasound. That was when I decided I had enough of the bad service I had at KKH, and searched for another gynae.

Thank God I found Dr Benjamin Tham, who is also a Christian, and his words made me felt more comfortable. He was soft spoken, gentle and assuring. I was rushed down to his clinic on the week before my actual appointment because I seemed to have brown discharge -_-

That was when I had my ultrasound scan and saw the little sac at 5 weeks.

And then we followed up 2 weeks later, and *WHEW* we saw the little beanie at 7 weeks 4 days on ultrasound, with a heartbeat of 140+ BPM. I was so relieved 🙂 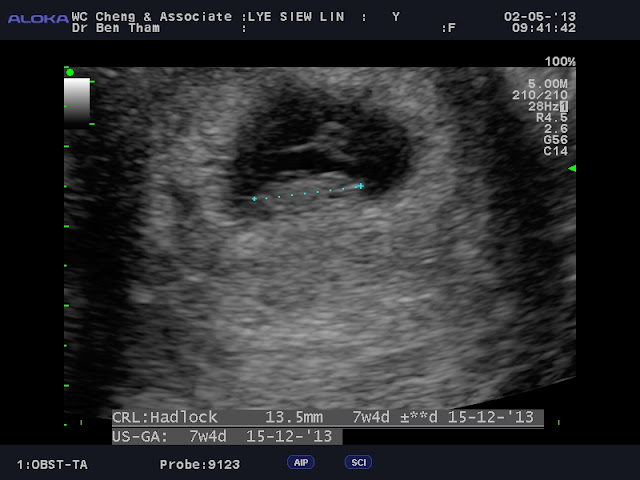 This was also the time when I relied so much on God than ever before, and realizing how we really do not have control over a lot of things. Our friends, the hubby and I prayed so diligently, and God answered 🙂

As we were fretting before the scan for heartbeat during week 7, God sent us the message that nothing can thwart His plans, and that He is always in control even when we see things as out of control – through the Bible Study lecture, and through a conversation with my supervisor.

And then as if God already know that I am still shaky, He continued to tell me to have faith through Bible Study lesson questions and Sunday School that weekend. And then the night before the scan, the hubby read his devotional – “You Are Not Alone”. I had this strong feeling that God had wanted me to know that we are not alone. He is with us, and He understands how we feel. And what we need to do is just to cast our worries and anxieties onto Him, and He’ll lead us through.

And all we’ve prayed for came true 🙂

Even during the scan in week 11, both the technician and my gynae did the ultrasound twice, and they praised the baby being a very “guai” baby, who is always in good position. #thankful

And now as we are approaching my 2nd trimester, I feel so thankful. In between all the swallowing of pills, painful injections and drawing of blood sample, I wouldn’t have known that I could love and protect another person as much as now. I think motherhood is truly an amazing journey for me. Praying that we would be good parents to this special someone that God has given to us 🙂